Minar Palace on Walnut Street in Philadelphia is not new to us.

A few years back after an extremely disappointing Chicken Zalfrazi dish we figured the restaurant was not worth a second visit and gave it the cold shoulder after that.

But the other day we were in Philly and having learned that Minar had launched a lunch buffet a few months back we decided to give the restaurant another try.

Alas, with a couple of exceptions Minar is still a mediocre Indian restaurant.

When we walked into Minar around 11:35 am, the restaurant was empty except for the staff. We were greeted by a middle-age Indian waiter and quickly shown a table.

As we were settling down, a turbaned Sikh waiter came over to enquire whether we wanted to have buffet or order a la carte. Since Lunch Buffet is relatively new at Minar, we opted for the buffet ($9.95 per person).

Vegetable Samosa was warm and had a freshly prepared texture and taste.

The Potato filling inside was tasty.


Veg. Samosa, Naan & Channa Masala
Samosa was so tasty that we helped ourselves to a second piece. The accompanying fresh Green Chutney enhanced the taste of the Vegetable Samosa.

Sadly, the Samosa was among the few delights we encountered at Minar Palace.


Chicken Tikka Masala & Lamb Saag
Mercifully, Lamb Saag turned out to be flavorful. The Lamb pieces were tender and although the gravy not as spicy as we'd like it to be, it was still tasty and we gobbled our small helping in no time.

Chicken Curry was another disappointment at Minar Palace.

You see, Chicken Curry is usually a spicy dish. But Minar Palace's travesty of a Chicken Curry was anything but spicy and was not boneless.

We quickly moved on to other items leaving this spiceless abomination behind.

Among the four Vegetable entrees that were part of the buffet, we loved Alu Baingan the most.


Alu Baingan and Chicken Curry
Alu Baingan was flavorful with Cilantro seasoning and went well with both Naan Bread and Plain Rice.

With a surfeit of burnt turmeric powder flavor, Dal Makhani did not endear itself to us one bit. 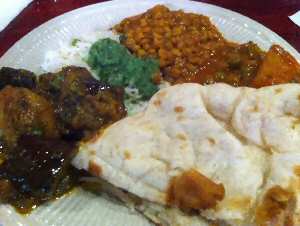 Channa Masala was a close competitor to Alu Mutter with a slightly salty taste.

Man, you have to be really, really bad Indian cook to mess up Alu Mutter and Channa Masala.

How can you mess up such basic Indian items?

Naan Bread was hot and that's all we can say in its favor. It was too thick and had a rubbery texture.

Besides the mostly less than impressive food at Minar Palace, we were not happy with the service either.

Rice Pudding was cold, creamy, medium-thick and came with pistachio and dry grape toppings. It could have done with a little more sugar but was still decent enough. 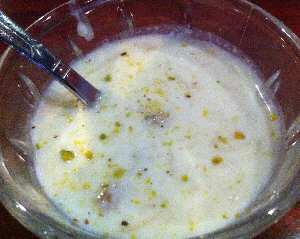 Decent Rice Pudding
No complaints with the Mango Ice cream as well. 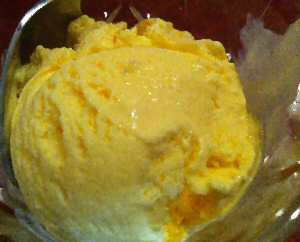 Good Mango Ice cream
Our grouse with both desserts was the small serving size.

Also, why was Rice Pudding not kept at the buffet table so that we can help ourselves to as much as we want. Hey, it's supposed to be All you can eat buffet, right?

These kind of cheap tactics at Indian restaurants irritates us a lot.

Bottomline, much of the food served at Minar Palace did not find favor with our Indian taste buds. It's unlikely we'll revisit the place any time soon.

But after reading our experience at Minar Palace, if you still plan on going for the lunch buffet make sure to check with the waiters about the desserts. © PhillyIndia.us